Of Memories and Music: the Continuing Saga of Apu

“Apu, ei Apu, Where are you?”  The voice of the young girl, calling out to her kid brother, floats in. And we know who she is. Or rather who she was.  And our eyes fill with tears. Our hearts break.

And just then an enchanting beating of drums, barely audible, filters in, synching itself with the rhythm of that heartbreak. And an endearing tune drifts in, as though to wipe away our tears and say “it’s okay”. And we hear a lilting, buoying orchestra of sounds that conjure up everything from the pitter-patter of rain to the silence of sunlight. From the soft whisper of breezes rustling through leaves of trees above to the low hissing of zephyrs swishing through the grass below. We listen as though to clouds floating past like memories over some hazy, nostalgia-tinted sky.

Welcome to a sneak peek of the official trailer of feature film, Avijatrik: The Wanderlust which is now ready for release in theatres, as soon as they reopen after the lockdown. It gives us a glimpse into the music scored by the acclaimed percussionist and composer, Bickram Ghosh. Ghosh clearly knows how to use sound to evoke the most extraordinary sights and scenes. And he does so generously in this film. His melodies mesmerize and stir up lost thoughts of many years ago, transcending time, infusing past with present.

And that return journey into the regions of recollection is integral to Avijatrik, avers Ghosh, who is a stickler for congruity, because this is a movie whose identity is inextricably linked to its past.

Not many know that Ray had left the concluding part of Bandyopadhyay’s story untold through his cinema.

For six decades, no one dared take it up. Perhaps it was a daunting idea. Ray’s movies and Bandyopadyay’s novels have acquired cult status. Indeed, the current filmmakers have faced a barrage of disapprovals from the inception and they have had to battle apprehensions with reassurances that there is no trespassing of the works of the great masters. “The script of Avijatrik deals only with the continuing story of Apu,” says Gaurang Jalan, who has co-produced the film with filmmaker Madhur Bhandarkar. “In fact, it takes up elements which figured in the original novel, like the character of Leela, but did not in the movies.” Actor Arpita Chatterjee essays the role of Leela, a childhood friend of Apu. Jalan says, “Before taking up the venture, we had approached the family of Bibhuti Bhushan Bandyopadhyay for the necessary permissions and clearances and they have granted us these.”

For Subhrajit Mitra, director of Avijatrik, it was a creative compulsion. “When I read the novel, I was intrigued by the fact that Apu’s story continued beyond the great trilogy,” he says . “The unexplored part dealt with Apu’s wanderlust and his growing bond with his son. It was the only part that had not been conveyed through the language of cinema.” His film starts where the trilogy leaves off and he calls his work a tribute to the geniuses who inspired him.

The music of Avijatrik also follows a proud legacy. Ravi Shankar, legendary sitarist, had composed the music for Ray’s Apu Trilogy. Sixty years later, the producers found a worthy successor in Bickram Ghosh. “He himself is a contemporary legend, who has had a long association with Ravi Shankar,” says Jalan.

Ghosh’s music, in Avijatrik, as in most of his compositions for cinema, is a reflection of his deep resonance with the story’s themes, an insistence on maintaining “congruity” with the classic cinematic portrayal of the story, and an amazing ability to interpret situations and the sounds that would adequately convey them. “There is a lot of pure classical here” he says about the music of Avijatrik.  In fact, he has been strictly purist about sound production, in that he has used only actual physical instruments rather than employ electronic technology, such as synthesizers that duplicate their tones. This is rare today, but Ghosh says that the film, set in the 1940s India, mandated it. And so the mellifluous mix emanating from a host of instruments – sitars and sarods, flutes and cymbals, not to mention tanpuras and tablas – do so, not from a heartless robot so to speak, but rendered by artists, human, thinking, feeling, breathing, sensing sorrow and sensing happiness. His music in Avijatrik absorbs, soaks up like sponge, this human touch.

Ghosh believes that his work in Avijatrik is a tribute to Ravi Shankar and the great masters, whose blessings he has imbibed and who have inspired him. And as a mark of this tribute, he asked his friend Anoushka Shankar, Ravi Shankar’s daughter, to play the sitar for the title sequence.

She has done so. Among those to have heard and been delighted by the rendering is her mother, Sukanya Shankar. In a social media post, she congratulated the makers of Avijatrik.

She wrote: “Avijatrik is a beautiful film. I didn’t think anyone would dare to tread on the musical work of Guruji for the Apu trilogy, nor the amazing film itself by the great Satyajit Ray. It would be impossible to even go anywhere near these geniuses. But, to my utter shock and pleasant surprise I have been proven wrong! The little I have seen and heard of the film has been a discovery. Shubhrajit Mitra’s excellent direction with Gaurang Jalan’s production is really noteworthy. The icing on the cake is by our Bicklram Ghosh, with his lovely and brilliant music composition, he has enhanced the film. He has imbibed so much from Raviji and has done him proud. I am also happy that Anoushka composed the opening credits for this wonderful film! Can’t wait to see the full movie!!!!!”

The sequence is sprinkled with dialogues as though voices from the past, pulling at our heart strings. “Apu, ei Apu, where are you?” the young girl’s voice floats in. And we know that she was Durga, calling out to her kid brother, days before she died of a fever in the first part of Ray’s trilogy, Pather Panchali.

Tears fill our eyes. Our hearts break. Then an enchanting and endearing music floats in. 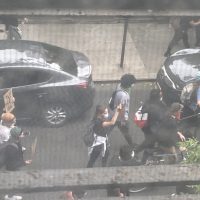