Beloved author, and author of “Beloved”; American icon, Nobel-laureate (and one of our favorite novelists), Toni Morrison, passed away on Monday, August 5, 2019, at age 88.

I lost a hero. A sort of mentor, even. It’s a strange thing to say, since I didn’t know Toni Morrison personally. But it’s not an exaggeration to say that she changed my life. Multiple times. I just wanted to mention a few examples.

When I was a teenager I read my first Morrison work, Song of Solomon. Easily one of the greatest aesthetic and intellectual experiences of my life. I was always immersed in books back then and I was shaped by my reading, as most readers are. By the time I read Song of Solomon I am sure I was aware of this, too.  But I think it was the first time I was palpably conscious of being altered by a piece of fiction as I was reading it. I knew I was never going to read the same way again. It changed points of view – as many of my favorite stories do. It painted a vivid and tangible world set in the past – as many of my favorite stories do (surprisingly many, actually, especially as regards long form fiction). It had a way of revealing truth and beauty through distorted, derelict lives and loves and selves. You were hit on the head with sudden realization – on several occasions, each completely unexpected – that the key facts on which you (the reader as well as each of the empathically attached characters you were experiencing) have based your major working assumptions of the world, were entirely mistaken. The wrong words to a song. The wrong stories about one’s ancestors. The wrong identification of the person interfering with your plans. Much of the narrative was also tinged with a trace of dark humor for which it has never got enough credit, in my opinion.

Sometime in my 20s I was going through a period of discord with one my closest friends. We were annoying each other and starting to avoid hanging out together. Right about this time, I read Sula.  There was something instantly recognizable about the friendship of Sula and Nell, personally and specifically for me – even though the events of the story, the characters of Sula and Nell, and the nature of their conflicts bore absolutely no resemblance to me, my friend, or our conflicts (I don’t even know who would be Sula and who would be Nell).  I dropped everything and gave a copy of it to my friend. She knew exactly what I meant!  It was hilarious and touching. We remain friends to this day.

I once read an interview Toni Morrison gave, I think it was right around the time Paradise was published. She was asked something about happiness. I don’t really remember the question. But I will never forget the answer. It is one of the deepest, simplest, most insightful, most elegant crystallizations of a work ethic – life ethic, really – that I have encountered in my life. I can’t recall the exact quote but the gist was this:  “I don’t know why people treat happiness as a thing to be chased, a goal in its own right. Just do something constructive. If it makes you happy – great. If not, at least the bread will be baked, the garden will be tilled, the book will be written.”

The books were written. I don’t know if the endeavor made her “happy” – but it has enriched and enlightened my life over and over, like a sage and hauntingly beautiful old song. 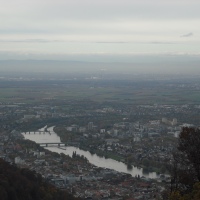